Honolulu, September 1, 2016- Community leaders from Okinawa are in Honolulu to appeal for the protection of their island from further US military base expansion that threatens public safety, critical natural resources, several endangered species, and local economy, among other concerns. Okinawans have overwhelmingly rejected more military bases, but the governments of Japan and the USA have ignored them, moving Okinawa to legal battles, civil disobedience and appeal for international support. Movement representatives will present their case in a public forum at the University of Hawai`i-Manoa, Center for Hawaiian Studies (2645 Dole St.) from 5:30-7:30 on Sept. 1st. 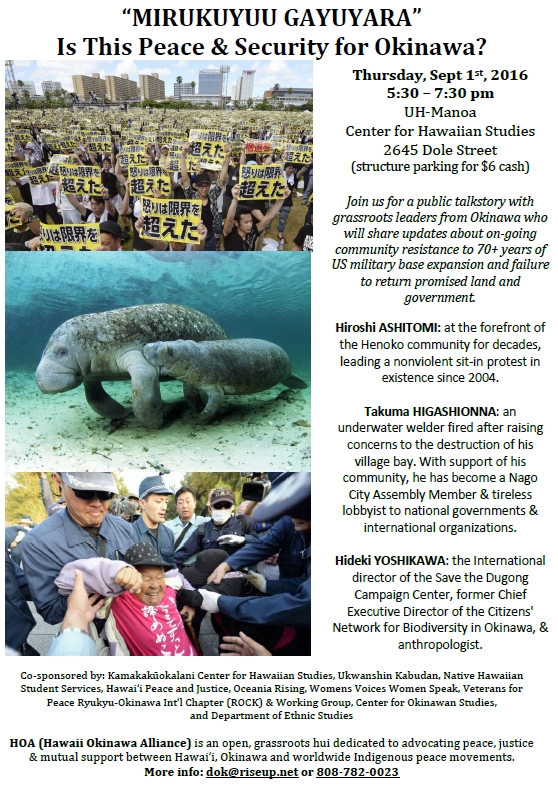 Hiroshi ASHITOMI and Nago City Council Member Takuma HIGASHIONNA are from the Henoko region in rural Okinawa Island, the site of the contested naval port construction into pristine Oura Bay, the northernmost habitat of the endangered dugong. Joining these grassroots community leaders is the international director of the Save the Dugong Campaign Center (SDCC) and Meio University professor Hideki YOSHIKAWA, who will be presenting a related resolution at the 2016 IUCN World Conservation Congress along with Nago Mayor Inamine. At the IUCN, the delegation will express dire concerns about alien species from imported soil to fill in the Oura Bay that experts warn will irreparably contaminate and damage the biodiversity of the fragile region.

Higashionna, formerly an underwater welder, was fired after expressing concerns about the naval port construction in the sea of his childhood that sustained local villages. With the financial and political support from the community, now Nago Assembly Member Higashionna has been at the forefront of this peoples’ stand-off. For over 20 years, construction has been stalled by lawsuits and local grassroots opposition, including the blocking of construction by kayaks and human bodies, daily protests, and arrests of elders at gates. He states, “We do not consider destroying our precious environment and livelihood as ʻproviding security and peace.’ Perhaps the U.S and Japan enjoys peace and security but only at the expense of Okinawa. That’s not how you create a peaceful world.”

Several local organizations like the Hawai‘i chapter of Veterans for Peace (VFP) have come to support this appeal for demilitarization as part of decolonization, including HOA

(Hawaiʻi-Okinawa Alliance), an ad-hoc committee that addresses the detrimental consequences of militarism in Okinawa, Hawai‘i and worldwide. Co-founder Pete Shimazaki Doktor, a second-generation Okinawan-American and former soldier, says, “Can you imagine if the US and Japan governments demanded to fill in Haunama Bay with hundreds of tons of concrete for yet another base, even though some 80% of locals were opposed to it? This is happening in Henoko. What kind of democracy and freedom is this, and for who?” Another supporting organization, Women’s Voices Women Speak, calls for “genuine security”—safe bodies, safe food, safe water for local communities—citing the recent rape and murder of a young Okinawan woman as another consequence of militarization. Native Hawaiian and Pacific Islander organizations are also supporting this forum as an opportunity to make connections with community-led demilitarization across the Pacific.

Okinawa was the sovereign Ryukyu Kingdom until Japanese colonization in 1879. During WWII, Imperial Japan and the US fought the bloodiest Pacific battle on Okinawan soil, resulting in the deaths of almost 1/3 of Okinawan civilians, and inspiring generations of Okinawans to oppose war. Okinawa was kept under US military rule until 1972 when it was reverted to Japan—but kept the US bases for forward-deployment for many other wars. Despite consisting of only .6% of Japan, Okinawa hosts almost 75% of US military in Japan. Okinawans feel they’re still treated as a colony, on an island about the size of Kaua‘i, that hosts 32 US military facilities in a denser population than Hawai‘i.

For those who can make it, we will have a check-in meeting next Tue, 12-1 pm, at Kokua Market, for final details and logistics.

Friday Sept 2nd: artmaking/signmaking, solidarity and connection across Oceania
2:30-4:30, @ the Access Lounge (Dean Hall rooms 5 and 6. Dean Hall is the building mauka of Ba-Le). An intimate and informal gathering with activists and students, where we can share stories of the struggles we are committed to, and make signs and art in support of demilitarization across the Pacific. We will definitely be making dugong cutouts!

Saturday Sept 3rd: signholding at the IUCN, tentatively 10-12 noon, in front of Convention Center (advise you get dropped off instead of trying to park). A number of different organizations will be gathering on Saturday in solidarity for community-led peace struggles. Join us in this peaceful gathering to share the message with the IUCN that discussions and plans about environmental conservation need to take de/militarization into account. Looking forward to seeing you soon.

Free and open to the public

Join us for a public talkstory with grassroots movement leaders from Okinawa who will share updates about the on-going community resistance to 70+ years of US military base expansion and failure to return promised land and government. In rural Henoko Village, Okinawans have used local elections, legal battles, and nonviolent resistance to stall for decades the construction of a massive naval port in the rich, biodiverse Oura Bay, construction that threatens endangered species, local economy, & regional peace. Come learn about ways to support international and local struggles for life and peace in Okinawa, Hawaiʻi, and across the Pacific.

Visiting Speakers:
Hiroshi ASHITOMI has been at the forefront of the Henoko community for decades as movement leader of various citizen assocations utilizing non-violent direct action, leading a sit-in protest in existence since 2004.

Takuma HIGASHIONNA was an underwater welder before termination after raising concerns to the destruction of his village bay. With the support of his community, he has become a Nago City Assembly Member, plaintiff in environmental lawsuits, & tireless lobbyist to national governments & international organizations.

Yutaka UMISEDO is a Save the Dugong Campaign Center representative & musician.

Hideki YOSHIKAWA is the International director of the Save the Dugong Campaign Center, former Chief Executive Director of the Citizens’ Network for Biodiversity in Okinawa, & anthropologist. He joins Okinawaʻs appeal to the 2016 IUCN in Honolulu.

Comment from Eric Wada (Ukwanshin Kabudan, 8/29/16): Important Presentation From Okinawa Concerning Okinawa’s Democracy, Henoko and Takae. This presentation panel from Okinawa includes some very prominent speakers. Governor Onaga has declared a crisis in Okinawa and this is a very good opportunity to find out what is happening in the birthplace of our ancestors. What is heppening in Okinawa affects the future of our culture, identity and environment of Okinawa. Please make time to attend this informative event. Yutasarugutu Unigeesabira!