The Floor Plan of Houses in Old Okinawa

My curiosity about the old Okinawan house began with a drawing that my Dad made about 2 to 3 years before he passed away. While visiting him at his house, out of the blue, he took my ball pen and a sheet of paper and sketched the floor plan of uncle Hoso Inafuku’s house in Oyakawa village in Haneji. This was where he stayed as a young lad of 8 years back in 1921 for 2 1/2 years. Here is his sketch:

When I first looked at it, I was totally confused. Where were the doors? There were no doors. Where were the rooms? There were no rooms. What were those little circles? They were wooden posts to hold up the thatched roof. What were the horizontal scratches at the corners of the house? They represented sliding doors. When the day began, you would slide the doors to the corners and vertically stack them side by side at the corners to create an open and well-ventilated living space. In the evening, you would slide the doors back into place to form a wall around the room.

My cousin, Yasuo Inafuku, sent me the picture below of his house in Taira village. It shows the front of his house. He told me that his house was used as an orphanage right after the war, so I believe it was built before WWII. Today, he still lives in this house. When I visited, I could see that it was old — but very solid. As you can see, it is rather large. There are the wooden sliding doors stacked at the corner and the wooden posts. Yasuo told me that people have come to him over the years wanting to buy his house. He declined their offers. But someday he may have to give it up, he says, since the skilled craftsmen who could repair houses like this are all fading away.

Here is a map of Okinawa, so you can see where the various houses in the Ryukyu Mura cultural village below came from.

On our last day in Okinawa several years ago, we visited the Ryukyu Mura cultural village in the Onna district. I took pictures of the Nakasone house because I was quite surprised how similar it was to my cousin Yasuo’s house. See the photo below. This is the front of the Nakasone house. What I found out about the old Okinawan houses I looked at, unlike the homes in our country where most are so different from one another, is that the ones in Okinawa all pretty much followed the same floor plan.

From this view, you can see that the front part of the house is divided into 3 rooms. The kitchen is on the left side in back or part of the front left room. The left room is normally used as the dining room. The room in the middle is usually reserved for the family shrine, and the room on the right is used either as a study room or a bedroom. From the houses I looked at in Ryukyu Mura village, I learned that all followed the same floor plan.

Why? I wonder. Was it decided a long time ago when they first started building these houses that following this floor plan yielded good fortune? Perhaps this was like the Chinese following Feng Shui principles when designing their houses?

As you can see in the photo below, the room at the right corner of the Nakasone house is used as a study. In my cousin Yasuo’s house, it is his son’s bedroom. What surprised me was seeing a rack of 5 expensive fishing poles in his room, very much like a hunter who has a rack of hunting rifles. No doubt, Yasuo’s son’s passion is fishing. He goes every chance he gets. 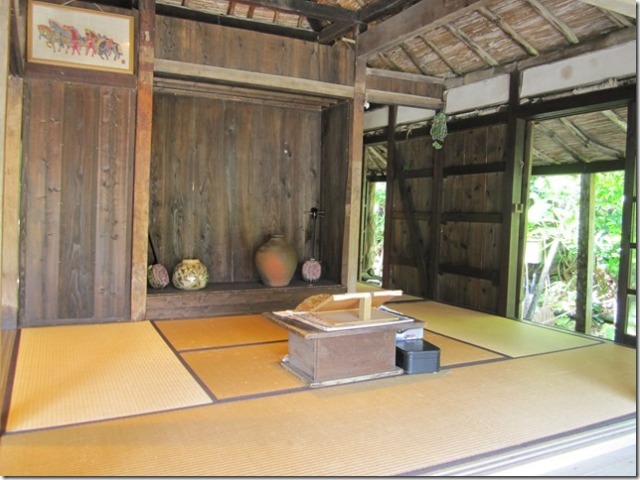 Picture below is the room on the left side of the house. As you can see, this is the kitchen and part of the dining room. Do they use that big fan to fan the fire?

The images below with the following writeups are from the Ryukyu Mura cultural village brochure.

Below is a picture I took of the Ooshiro house. Note that the posts holding up the roof aren’t straight. Why? I think because large timber, which you could shape into straight poles, was hard to come by in Okinawa. Because of the many typhoons that pass over Okinawa every year, most trees can’t grow big over much of the island. The ones that do are in the northern part of the island where it’s mountainous.

During one of our trips to Asia, we visited Seoul, South Korea. One day, we went to see the cultural village on the outskirts of the city. As we walked through the village, we came across an old village house. I was so surprised that it looked very similar to an old Okinawan house. The picture below shows that the Korean house had a thatched roof like many of the old Okinawan houses, although later the thatched roofs in Okinawa were replaced with ceramic tiles. 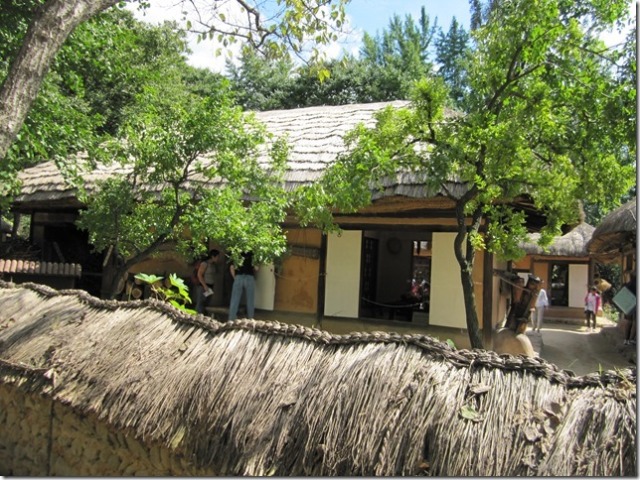 As you can see in the picture below, the Korean house also has 3 rooms in the front. The left room is the kitchen-dining area, the middle room is the family shrine room, and the room on the right looks to be a study.

This entry was posted in Culture, History, Images, International, Travel. Bookmark the permalink.