My 3rd Trip to China: The China-Okinawa Connection

One day in Shanghai, we spent a few hours at the City God Temple shopping center looking around. We had finished a delicious multi-course lunch there in one of the restaurants and were waiting for our bus to come pick us up.

A short stocky guy about 5′ 3″ wearing a party mask came walking toward me on the sidewalk in front of the shopping center stores. He was selling party masks. He would blow air out from his nose, and the curled paper tubes would straighten out on both sides of his face while making a whistling sound. Funny sight. Was he a clown? Or trying to act like one? People watched as he passed, but nobody would buy.

He sat down on the steps, took the mask off and wiped the perspiration from his face. It was obviously uncomfortably hot under the mask. But his face took me by surprise. He didn’t look Chinese at all. This guy looked like a true blue Uchinanchu (Okinawan)! He had thick black eyebrows, a wide face, a head of black hair slightly balding at the top, and a sorta dark complexion similar to many Okinawans I know in Hawaii and Okinawa. I looked at his forearms, and they were hairy like mine.

Obviously, he had decided to take a break. He took out a cigarette and lit up. The look on his face was “Man, this is not fun. There must be something else better than this.”

The more I looked at him, the more I was convinced he was Okinawan. Questions immediately came to mind: How did he end up here at the shopping mall selling silly party masks? If he was Okinawan, how did he come to be in Shanghai? Is he from Okinawa or was he born in China? Perhaps Chuang-chou (Quanzhou) or Fuzhou?

I began thinking of how he could have come to be here. Thoughts of Okinawa’s long historical relationship with China passed through my mind.

The 500 year formal relationship between Ryukyu (Okinawa) and China began way way back in 1372 when the Ming Dynasty’s emperor Hung Wu Ti sent envoys to the Ryukyu Islands to request Chuzan’s (middle kingdom) King Satto to send representatives to Nanjing, the capital of China at the time. In 1372, Ryukyu was divided into three kingdoms: Chuzan (middle), Nanzan (sourthern), and Hokuzan (northern). 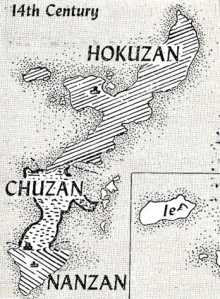 In 1374, King Satto sent his younger brother Taiki on the initial tribute mission to Nanjing with a number of attendants. On a Ryukyu ship, Taiki and his attendants arrived at China’s Chuang-chou (Quanzhou) city, which was Ryukyu’s official port of entry. China’s strict rules allowed only 20 from Taiki’s group to proceed to the capital. The rest remained in Chuang-chou. Traveling 567 miles to Nanjing took quite a while. If horses were provided for the Ryukyuans, it took perhaps a few weeks. If they traveled by foot, it would’ve taken months.

At Nanjing, the Ryukyu group spent more time preparing and then participating in the palace ceremonies and exchange. Counting the wait for favorable winds after Taiki’s return to Chuang-chou city, the time spent in China could have easily been a year.

Emperor Hung Wu Ti acknowledged Taika’s tribute by conferring elaborate gifts. All of the Ryukyu group’s expenses in China were defrayed by the Chinese government. Upon his return to Chuzan, Prince Taiki presented those gifts of books, textiles, ceramics, and ironware from the Emperor to King Satto.

Within the next two decades, at least nine official missions traveled from Chuzan to the Chinese capital with Prince Taika leading three of them.

The first missions from Ryukyu proceeded through the city of Chuang-chou, port of entry to Nanjing. My guess is that the Chinese avoided the Fukien mountainous regions by traveling along the coastline, passing through Fuzhou, which was another port city, until they got to Hangzhou. At Hangzhou, they may have traveled by boat on the Grand Canal, which went through Suzhou to Wuxi to Changzhou to Zhenjiang on the Yangtze River. From there they could have gone up the Yangtze to Nanjing by boat.

Gradually, a permanent Okinawan settlement grew in Chuang-chou. Plebian Okinawans waiting the return of the tribute mission from Nanjing became thoroughly familiar with the daily life of the Chinese city and with the arts and crafts in the urban Chinese centers. They brought back knowledge and stories of China to Naha and Shuri.

In 1383, Lord Ofusato of Nanzan also sent envoys to China. Lord Hananchi of Nakijin also sent envoys from Hokuzan (northern kingdom). The Chinese, with impartial benevolence toward these Ryukyuans, granted seals, investiture and the right to trade to the Nanzan and Hokuzan tribute missions as they had done with Chuzan.

In 1406, the third Chinese emperor, Yung Lo, began preparing Beijing as the new capital of China, finally declaring it as the new capital in 1420. So from 1402 until 1873, instead of going to Nanjing, Ryukyu tribute missions were required to make the long and arduous journey to Beijing, thus spending more than twice the time in China.

In 1429, King Sho Hashi of Chuzan united all three kingdoms of Okinawa. From then on, tribute missions from the Ryukyus were reduced to one.

Fuzhou also became the port of entry for Ryukyu tribute missions. In fact, Fuzhou was to become the chief center for Ryukyuan activity in China – the chief intermediary point for Ryukyuan officials traveling from Okinawa to Beijing. Ryukyuan officials established a Ryukyu-kan in Fuzhou, which housed dignitaries and scholars en route from Okinawa to Nanjing or Beijing. Below is a photograph of the Ryukyu-kan in Fuzhou as it looks today.

While stationed at the Ryukyu trading depot in Fuzhou, Noguni Sokan came upon the sweet potato plant. In 1605, when he returned to Okinawa, he brought the sweet potato back with him. Recognizing that this could be the answer to the famines that Okinawa endured as a result of the many yearly typhoons, Gima Shinjo, Magistrate of Agriculture, had the sweet potato distributed all over Okinawa.

In 1620, Shinjo, thinking that sugar cane could have potential in Okinawa, sent a mission to China to study growing techniques. After being introduced in Okinawa, sugar cane quickly became Okinawa’s major cash crop.

In March 1897, Uechi Kanbun left Okinawa for Fuzhou to study Chinese martial arts. Uechi followed other Okinawans such as Higaonna Kanryo and Nakaima Norisato who came to Fuzhou to study the Chinese martial arts. He settled in at the Ryukyu-kan and supported himself by working a variety of jobs. When he returned to Okinawa, he started teaching his Uechi-ryu karate, which developed into one of the popular Okinawan karate styles.

I thought it was very possible that Okinawans came to China, made China their home and ended up becoming citizens in their host country, just as they have in Hawaii, South America, Central America, and Micronesia.

With the Okinawan-looking silly mask seller sitting on the steps enjoying a cigarette, I decided to see if he was Okinawan. Only, I didn’t know how since I couldn’t speak Chinese, but I felt I had to try. I went up to him and spoke in English to draw his attention. He thought I wanted a mask so he gestured the mask he was holding to me. I shook my head. “No no no.”

I put my arm next to his and said, “You and me same,” meaning we both had hairy arms. He had no idea what I was talking about. He looked up at me and pulled his shirt open, showing me his hairy chest. I thought, Yeah! He’s Okinawan all right! I couldn’t do the same as my chest is the Chinese part of me — hardly any hair. I should’ve pulled up my pant leg to show him my hairy Okinawan leg, but I didn’t think of it.

By then, my wife was tugging at my shirt. “C’mon let’s go. The bus is here.” Reluctantly, I left with the wife. Just as well. I’m sure people watching us were thinking, Man, look at those two guys. They’re trying to see who’s the hairiest.

I guess it’s funny when you think about it, but all I was trying to do was find out if he was Okinawan. Well, if you happen to go to the City God Temple shopping center and see this short stocky Okinawan-looking guy selling silly masks, and if you can speak Chinese,  be sure to ask him if he’s Okinawan.

This entry was posted in Culture, History, International, Karate, Travel. Bookmark the permalink.