I was told by my cousin, Yasuo Inafuku, who lives in Taira village, Haneji, Okinawa, that the photo below is of the Haneji Community Center, which was located next to Oyakawa village.

Panel 1. Haneji Community Center, Haneji, Okinawa. Click image to enlarge. This is the left side (panel 1) of the Haneji Community Center. The right side (panel 2) is below. Created 3 enlarged photos of sections in each panel — see below. If your family is from Haneji, see if you recognize any of your relatives. You may want to send the URL of this article to your relatives in Haneji to see if they can recognize anyone.

My dad, Ronald Inefuku, had wanted to send this photo back to Yasuo. However, at that time he had no idea what Yasuo’s address or phone number was. He asked me to help him out. So I asked my friend, Gima, who is from Okinawa but works in Tokyo, to see if he could look up my cousin’s Haneji address and phone number.

Well, he not only found my cousin’s address and phone number, he called Yasuo and had a nice talk with him. The rest is history. Yasuo called my dad, and after 40 years (since the late ’60s), they had a nice nephew-to-uncle talk. After my dad passed away in 2010, my wife and I went to Okinawa and met Yasuo for the first time. I am forever indebted to Gima for helping our Inafuku family. He was instrumental in bringing together the families in Okinawa and Hawaii.

If this building is next to Oyakawa village, I would venture to guess that the people in this photograph were probably from the villages close by: Oyakawa, Taira, Kawakami, and perhaps even Burikina and Nakoshi, a fishing village on the coast. According to my dad, back during the ’20s when he was there, people got around by walking. They didn’t even have bicycles. No personal cars. Horses were the “beasts of burden” and used for farming, not for riding.

So I’m guessing that it would be hard for Haneji folks who lived in villages distant from the community center to attend. But my dad’s impression of Okinawa was based on the ’20s. This photograph was taken 20 years later. Much could have changed, transportation could have advanced.

Note the American flag hanging in the building. I’m guessing this was to signify to the American soldiers that this was an “American friendly” building. I’m guessing that this picture was taken not long after the Battle of Okinawa. Most of the destruction on Okinawa during the battle took place in the southern part of the island where Naha and Shuri, including Shuri castle, were completely destroyed.

Haneji is in northern Okinawa where I believe much was untouched by the battle. Displaying the American flag could have been Yasuo’s father’s (my dad’s half-brother’s) idea. Yasuo’s father came to Hawaii during the early part of the 1900s and worked on the sugar plantation with his dad, my grandfather. He went back to Okinawa just before WWII started.

Note the kimonos of many in the photo. They look like Bashofu kimonos made of banana cloth. My dad said that it was common for the women to make Bashofu cloth and the Bashofu kimono at home. His aunty, who my dad was living with, always made his summer kimonos. He said there was a community weaving machine (loom) for making the Bashofu cloth, which went from house to house in Oyakawa village. 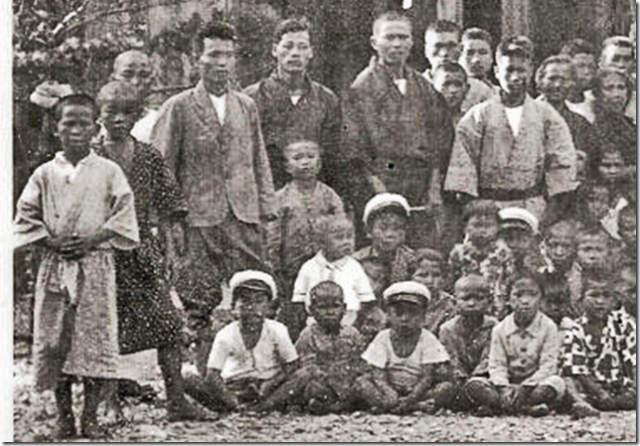 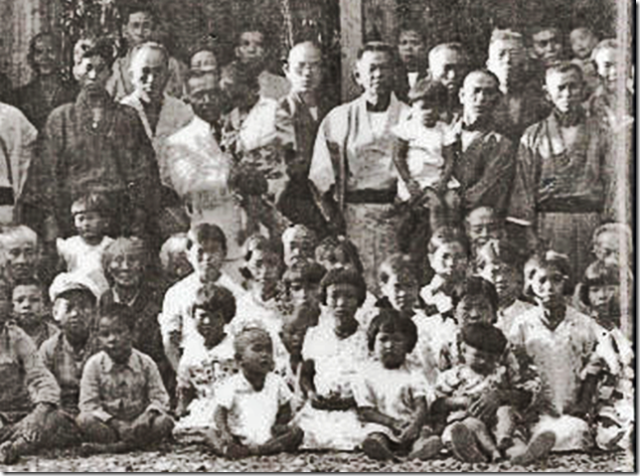 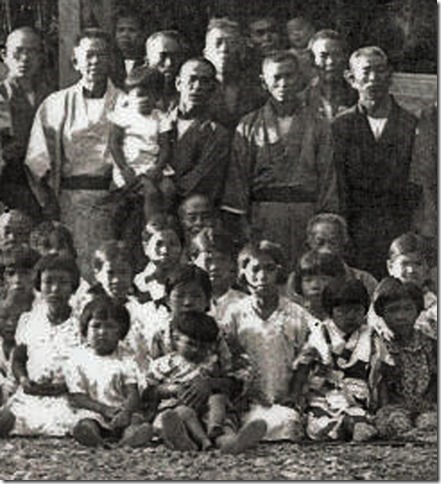 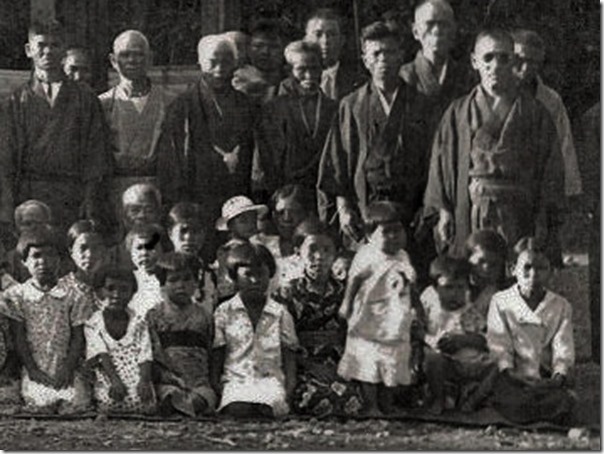 Panel 2: enlarged right section. Seems to me that most of the men in this enlarged photo are wearing cotton kimonos.

Since I mentioned Oyakawa, Taira, Kawakami Burikena, and Nakaoshi villages, I thought I would include a map of that part of Haneji to show where the villages are located.

This entry was posted in Culture, History, Images, International. Bookmark the permalink.