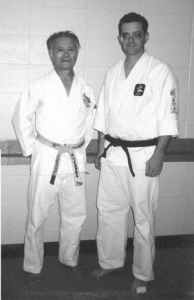 Although the marble wall at the USS Arizona Memorial Visitor Center at Pearl Harbor lists only the sunken battleship’s 1,177 dead crewmen, the Remembrance Exhibit on the back lawn is dedicated to all 2,338 Americans killed or mortally wounded on December 7, 1941, a number that includes 48 civilians.1

Four of the dead civilians were boxers. They were:

LaVerne was injured at or near Pearl Harbor’s Red Hill underground fuel tank construction project and died of injuries several days later. Additional details of his death are not available. The other three men were killed or fatally injured by a single blast at the Cherry Blossom Saimin Stand on Honolulu’s South Kukui Street. (Saimin are noodles, but this was essentially a diner.) The men were on their way to a weigh-in, and the cause of the explosion was an improperly fused US Navy anti-aircraft shell.4 The naval shells were fused to explode after 3-8 seconds in the air, but if improperly set or malfunctioning, then they exploded on impact with the ground.5

The time of explosion was probably between 9:40 and 9:50 a.m., as around that time, R.K. Uyeno, a Honolulu physician attending a lecture at the nearby Mabel L. Smyth auditorium, heard several loud explosions in the direction of Nuuanu Street.6 And Paul Lou, then an 11-year old boy on his way home from delivering newspapers, recalls that around 8:00 a.m., everything had been normal, but by ten o’clock the Cherry Blossom Saimin Stand was rubble.7

Four additional fatalities were friends accompanying Higa, Inamine, and Koba to the weigh-in. These were:

Seven of the eight boxing-related fatalities were therefore from the Big Island of Hawaii. Of these, five were from Waiakea Mill camps and all but Koba (Fukuoka), Uyeno (Hiroshima), and LaVerne (Puerto Rico) were of Okinawan ancestry.

There were several survivors of the Kukui Street explosion. One was Kikuyo Hirasaki; her mother owned the Cherry Blossom Saimin Stand and in the blast she lost not only her job but also her three children and her brother.9 And another was the 24-year-old professional boxer Eishin “Toy” Tamanaha.

When Toy Tamanaha awoke on the morning of December 7, 1941, it was to the sound of explosions at Pearl Harbor. He figured it was just another exercise, so after dressing he strolled to a nearby café for breakfast. Someone mentioned that there was a war going on, but being a young man with other things on his mind, he paid no attention.10

After breakfast Tamanaha joined up with his friends: in a time when plantation feudalism still dominated Hawaii, Waiakea-Uka and Piihonua buddies stuck together. But for some now forgotten reason Uyeno’s housemate Toshi Morimoto decided to stay home that morning.

Higa and Koba were scheduled to participate in an amateur boxing match on Monday, and their weigh-in was at the Catholic Youth Organization (CYO) gym. En route to the gym, which was located on the third floor of the Lady of Peace Cathedral on Fort Street, the men stopped at the Cherry Blossom Saimin Stand on South Kukui Street. Tamanaha bought a Popsicle; Higa played pinball.11

And sometime between 9:40 and 9:50 an anti-aircraft shell hit the noodle stand and fifteen people were killed or injured.

Tamanaha found himself lying in the middle of the street. “I was conscious,” he later recalled. “I just sat there, looking at my legs. They were all mangled. Then I lay down on the street and blacked out.”12

Shortly after 10:00 a.m. CYO gym manager Bill Kim and some of his boxers happened by. “We saw Toy and the rest of the boys sprawled on the street, bleeding and dying,” Kim wrote in 1946. “We were too stunned to do anything at the moment.”13 So it was another passerby, George Apela, who picked up Tamanaha and took him to Queen’s Hospital on Punchbowl Street.14

The emergency room attendant sent Tamanaha to the temporary morgue in the basement. While there, Tamanaha regained consciousness and began moaning. The morgue attendant had to search through the bodies to find which one was making the noises. The hospital’s elevator wasn’t working so the attendant then had to use a hand hoist to raise Tamanaha from the basement to the surgery on the fourth floor.15

Three surgeons and an intern were working at Queen’s Hospital that day. The surgeons were Rogers Lee Hill, James R. Judd, and Douglas Bell; the intern was Harold Sexton. During the course of the day the four men performed several bilateral amputations, but Tamanaha was the only one to survive.16 Queen’s Hospital patients provided the blood transfusions required on Sunday and members of the CYO boxing team donated blood on subsequent days.17

[Photo caption]”To the gang at Columbia Inn, Best Wishes, Toy Tamanaha.” The Columbia Inn, located at the “top” (west) end of Kapi’olani Boulevard in Honolulu, was owned by former Hilo resident Tosh Kaneshiro, and its bar, dedicated to Knights of the Raised Elbow, featured photographs of baseball players and other athletes.18 Photo courtesy of Sandy Tamanaha Touchi.[end caption]

On March 3, 1942, Tamanaha underwent additional surgery. When word went out at the CYO gymnasium, fifteen volunteers including the well-known professional David Kui Kong Young immediately went to the hospital to give blood. However, only three had the right type, among them CYO manager Bill Kim.19

Following his discharge from the hospital Tamanaha moved in with his sister. Toward earning a living, he applied for a liquor license but was denied, probably due to his ethnicity. In 1945 he had some serious kidney problems and he had to go back into the hospital. This time fortune began smiling on Tamanaha, as in the hospital, he met a young woman, Haruko Morita, and on February 15, 1946 the couple were married; eventually they had four daughters. Meanwhile Honolulu businessman Danny Clement decided to support Tamanaha’s reapplication for a liquor license and in April 1946 he was granted permission to open a package store in Hilo.20 In January 1947, Hawaii’s delegate to Congress, Joseph R. Farrington, introduced a bill into the House of Representatives requesting that Tamanaha be granted $20,000 “for personal injuries suffered when struck by a bomb on December 7, 1941, resulting in loss of both legs and other injuries.”21 And perhaps best of all, in June 1948 Tamanaha’s friend George Costa presented him with a pale green Dodge sedan that had brake and clutch levers on the dash instead of the floor. “It feels wonderful,” Tamanaha told reporters. “Now I won’t have to look at four walls all day and night. I can go out whenever I want to without bothering my friends.”22

1 Honolulu Star-Bulletin, December 7, 1996, B-1; available online at http://starbulletin.com/96/12/10/editorial/viewpoints.html; see also USS Arizona Memorial, National Park Service, http://www.nps.gov/usar/ExtendWeb1.html.That said, Hawaii War Records Depository (HWRD) catalog number HWRD 12 dated January 25, 1950 lists 74 names, one of which may be a duplicate and two of which are under the heading “indirect”. Meanwhile, for a Japanese Navy photo of Pearl Harbor taken about 8:00 a.m., December 7, 1941, see http://www.spawar.navy.mil/sti/visualmedia/photos/hisaer40-49.html.
2 In this context, Waiakea refers to that portion of Big Island south and east of Hilo Town. Uka means “upland”, and so refers to people living upcountry instead of along the shore.
3 Piihonua is located several miles west of Hilo and in 1920 was home to a sugar mill and its worker camps. The ten Waiakea camps were located south of Hilo; Camp One was located just west of the Hilo airport while the other nine camps were inland along the Waiakea Plantation Railroad. The researchers do not know of any published histories of life in these Big Island camps, but for recollections of plantation life on Oahu see the University of Hawaii site http://www2.soc.hawaii.edu. (On the site search engine, try the keyword “plantation”.)
4 In 1941, standard US naval anti-aircraft guns included 5″/38 and 5″/25 dual-purpose guns, and their anti-aircraft charges carried about 54 pounds of high explosive. Details of these rounds may be found at http://www.warships1.com/Weapons/WNUS_5-38_mk12.htm and http://www.warships1.com/Weapons/WNUS_5-25_mk10.htm; discussions of 5″/38 burst radiuses can be found in US Army Field Artillery School Lesson Plan 061-284-4249, “Coordinate Requests for Naval Gunfire,” http://155.219.39.98/Tatscourse/13f40/taa8ya.htm. That said, the round conceivably could have been a 3″/50. Anti-aircraft charges for this round contained 15 pounds of high explosive and are described at http://www.warships1.com/Weapons/WNUS_3-50_mk10-22.htm.
5 Under optimal conditions, US Navy time fuses worked 90-95% of the time. So, given the quantity of shells sent skyward, it is not surprising some failed to work, especially when fired by gun crews under attack for the first time. For the US government admitting that it was naval gunfire that struck Honolulu, see Gordon W. Prange with Donald W. Goldstein and Katherine V. Dillon, December 7, 1941: The Day the Japanese Attacked Pearl Harbor (New York: McGraw-Hill, 1988), 348. See also the recollections of US Army master gunner Frank Luciano in Remembering Pearl Harbor: Eyewitness Accounts by U.S. Military Men and Women, edited by Robert S. La Forte and Ronald E. Marcello (Wilmington, DE, 1991), 223: “The marines were not cutting their fuses on their 4-inch square battery…If you didn’t cut a fuse, naturally it didn’t explode in the air.” Also see the report of USS Dale, DD-353, December 28, 1941, http://www.ibiblio.org/hyperwar/USN/ships/logs/DD/dd353-Pearl.html, where Lt. Commander A. L. Rorschach reported: “It may be of interest to note that a great number of the bursts on the water were of the nature of exploding 5″ shells rather than bombs. It is believed that either the fuses were not cut on many of the 5″ A.A. [anti-aircraft] projectiles or that they were not operative.” For discussions of naval anti-aircraft capabilities of the era, to include failure rates, see William J. Jurens, “The Evolution of Battleship Gunnery in the US Navy, 1920-1945,” http://www.warships1.com/W-INRO/INRO_BB-Gunnery_p2.htm. Also see the interview with Lee Davenport, who helped design the first radar-tracked anti-aircraft guns, at http://www.histech.rwth-aachen.de/www/quellen/transcripts/davenport.html, and the discussion of the development of proximity fused anti-aircraft shells at http://www.history.navy.mil/faqs/faq96-1.htm.
6 “Reminisces of December Seventh: VI: Hawaii Medical Journal, 7:6 (July-August 1948), 497-500; reprinted at http://hml.org/mmhc/ww2/remdoc6.html.
7 E-mail from Paul Lou, October 30, 2000. Although Toshi Morimoto reportedly recalls the time as nearer 11:00, all other sources place the explosions nearer 10:00.
8 Theodore H. Davies and Alexander Young started the Waiakea Mill Company in 1879 and by 1900 the sugar refinery employed about 600 men. The mill, located about 1.25 miles southeast of Hilo, closed in June 1948, but in September 1951 Ryukyu Seito Co., Ltd. purchased its machinery and relocated it to Chikazan, Okinawa, where production resumed on January 10, 1953. At the Waiakea Mill, the bagasse, or cane stalk, was originally burned as fuel, but during the 1930s the bagasse was replaced with oil and used to manufacture wallboard instead. The Canec plant, owned by New York’s Flintkote Company, burned in April 1960. The site was subsequently cleared and replaced with the Waiakea Villa Hotel while the adjacent millpond was made part of Wailoa River State Park. For a description of the Waiakea Mill and the adjacent Canec plant, see The History of the Waiakea Pirates Athletic Club and the Yashijima Story (Waiakea Town) (Waiakea Pirates: Hilo, 1999) and Howard Pierce, “Waiakea Mill Housing Honomu Works Now Ryukyu Seito Co., Ltd. at Naha,” Hilo Herald-Tribune, undated clipping (probably September 1953). For an online photo of the area today, see http://hawaii-island.com/travel/july1999.htm.
9 Allen Beekman, “Pearl Harbor Civilian Casualties,” Hawaii Herald, December 6, 1991, A-6.
10 Newsweek, December 12, 1966, 39-40.
11 Ibid.; Interview report of Miss Kikumi Higa re death of her brother, Masayoshi Higa on December 7, 1941[HWRD 50].
12 Newsweek, December 12, 1966, 39-40.
13 Bill Kim, Honolulu Advertiser, February 16, 1946.
14 Martha Luna, Hilo Tribune-Herald, December 7, 1955, 5.
15 Ibid.
16 “Reminisces of December Seventh: V,” Hawaii Medical Journal 7:5 (May-June 1948), 412-413, reprinted at http://hml.org/mmhc/ww2/remdoc5.html; “Reminisces of December Seventh: VIII,” Hawaii Medical Journal, 8:3 (January-February 1949), 222, reprinted at http://hml.org/mmhc/ww2/remdoc8.html.
17 Honolulu Advertiser, December 10, 1941.
18 Honolulu Advertiser, November 12, 2000, A-27.
19 Honolulu Advertiser, March 4, 1942; see also Hilo Tribune-Herald, March 6, 1942.
20 Bill Kim, Honolulu Advertiser, February 16, 1946; Bert Nakaji, Hilo Tribune-Herald, March 1, 1946; Bert Nakaji, Hilo Tribune-Herald, March 3, 1946; Don Watson, Honolulu Star-Bulletin, March (day unknown), 1946; Hilo Tribune-Herald, April 11, 1946; Bert Nakaji, Hilo Tribune-Herald, May 4, 1946; Martha Luna, Hilo Tribune-Herald, December 7, 1955, 5.
21 Hilo Tribune-Herald, January 15, 1947.
22 Hilo Tribune-Herald, June 27, 1948.

This entry was posted in Culture, History, International, Sports. Bookmark the permalink.